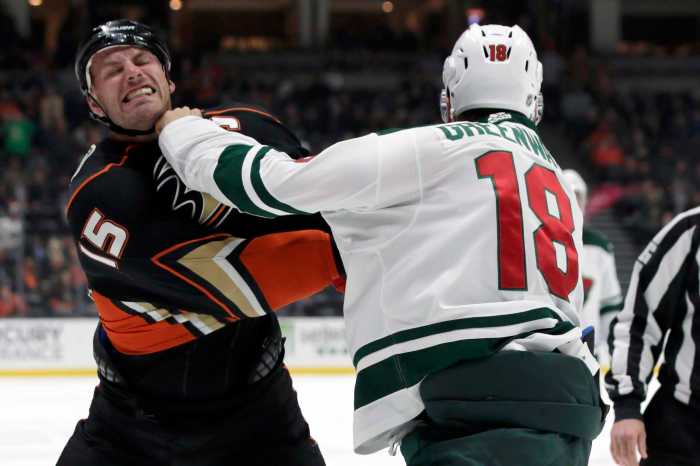 Anaheim, Calif. – The Anaheim Ducks continued their homestand against the Minnesota Wild. Ryan Miller was in net against Devan Dubnyk. Anthony Stolarz was recalled and would back-up Miller because John Gibson strained his groin in the previous game.

The Ducks would strike first in this contest as Jakob Silfverberg would rip a shot past Dubnyk’s glove side. The tables quickly turned against Anaheim, however, as the Mats Zuccarello scored less than a minute later to tie the game.

Dallas Eakins challenged the goal for goalie interference because of contact made with Miller before the shot. The refs ruled that Alex Galchenyuk made contact outside of the crease so the goal stood. The Ducks also had to go shorthanded because they lost the challenge. The Wild scored on the ensuing power play and lead 2-1 after twenty minutes of play.

Ryan Getzlaf and Jordan Greenway did drop the gloves in the opening period. It wasn’t much of a fight because Greenway had a hold of Getzlaf’s chin strap during the bout.

Anaheim struck back in the second period with a pair of goals. Danton Heinen made move toward the Wild goal and was able to squeeze the puck inside the short-side post for a goal. It looked like Jonas Brodin may have knocked the puck off Heinen’s stick and into the net. Silfverberg would then get his second of the game beating Dubnyk low on his glove side.

Minnesota would then counter with two goals of their own in the third period. Victor Rask would score early in the period to tie the game at three. Galenchuk would then give the wild the lead with less than six minutes to go. Christian Djoos would answer in the final minutes of the period as he beat Dubnyk just inside the post. It would take bonus hockey to settle this one.

In overtime, Josh Manson was called for tripping with just over a minute left in the extra session. Kevin Fiala would then score on the power play to give the Wild the win.

Josh Manson returned to the lineup after having to leave the game against Chicago last week.

Anthony Stolarz was recalled because Gibson pulled his groin in the previous game.

Isac Lundestrom was recalled yesterday but did not play.

Silfverberg scored his 20th goal of the season.

This was a hard-fought game for Anaheim. Despite getting down two separate times in this game, the Ducks were able to fight back. The issue for Anaheim in this game was they couldn’t stop the Wild on the power play as they scored two out of three times. It was also unfortunate that the first Wild goal stood by Zuccarello. The play was challenged and deemed a good goal because the contact was outside of the crease. Per NHL Rule 78, “Goals should be disallowed only if: (1) an attacking player, either by his positioning or by contact, impairs the goalkeeper’s ability to move freely within his crease or defend his goal.” Miller wasn’t able to “defend his goal” regardless of where the contact was initiated. Despite the controversial call, it was good to see the Ducks continue to play and almost nearly win the game.

The Ducks continue the homestand against Ottawa on Tuesday.

Support us by becoming a DucksNPucks patron! Members can win game tickets, a $200 Cool Hockey gift card, and more!

DucksNPucks is part of The Puck Network, which covers the entire NHL. There are openings to cover your favorite team(s) and earn school credits! If you are interested, then apply by filling out the form here: Join Our Team. What are you waiting for? Start your sports media career TODAY!