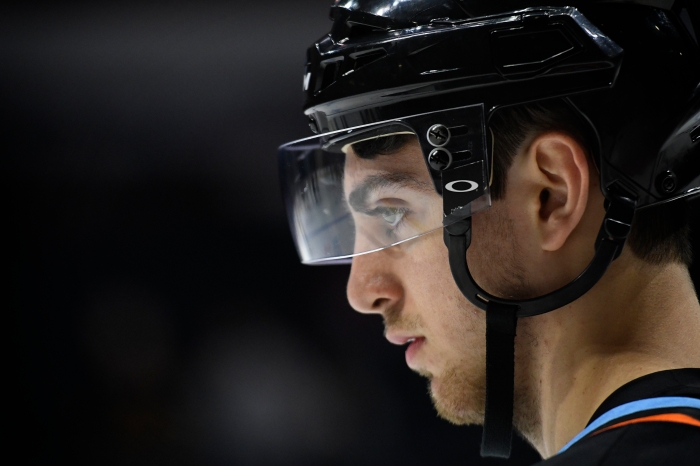 A fourth-round pick from 2016, Jack Kopacka just completed his second professional season, splitting time between the AHL and ECHL.

Kopacka only spent a little time in the ECHL. He was assigned in early December to Tulsa and scored four goals and eight points in five games for them, before being recalled in mid-December. With the Gulls, Kopacka played in 37 games and scored seven goals and 15 points. He scored one more goal and one more point than his rookie season when he had played in 32 games. Kopacka was in and out of San Diego’s lineup and spent most of his time on the team’s fourth line, but he did see time on all four lines. Kopacka had a strong start to the season, with six points in his first nine games.

However, as November went along, his offensive production dried up, which led to his short trip to the ECHL. After his recall, Kopacka had five points in his first four games back with the Gulls, including a two-goal and three-point performance. Clearly, his assignment to the ECHL had given Kopacka some confidence in his game and that translated into his play back in the AHL. Unfortunately, that offensive production didn’t last long, and he only had three points through the rest of the season.

Listen To Our Hockey Podcast

I had a couple of expectations for Kopacka for this past season. First, I wanted him to stay healthy. He had missed significant time as a rookie, and I wanted him to have a healthier season this time around. He was able to do that, but it didn’t translate to a consistent presence in San Diego’s top six like I had hoped for. Second, I wanted him to set a career-high in goals and points. Again, he was able to do that, but it was only one more goal and one more point. So Kopacka was able to meet my expectations from a year ago, but they didn’t lead to a larger offensive role on the team like I was hoping for.

This coming season, Kopacka will return to San Diego for his third season in the AHL. I’ve got a few expectations for him. First, to not spend any time in the ECHL. His response at being demoted was great to see, he had a few great games with San Diego after being recalled, but I want Kopacka’s play to be much more consistent and not require a trip to the ECHL to light a fire under him. Second, to not have such long stretches of games with no points. He had four different stretches this season of four games or more without any points, including eight straight games with no points after his hot streak in December. Finally, assuming the Gulls play in enough games, I’d like to see Kopacka play over 40 games next season.

Kopacka has one year left on his entry-level contract and will be a restricted free agent next summer. Assuming he spends all of next season in San Diego and plays in a majority of their games, I think he’ll be re-signed. However, if he struggles to stay in the lineup on a consistent basis, then I think the Ducks and Gulls may let him become a free agent.

The next prospect update will be on Trevor Janicke.

Listen to our hockey podcast by clicking below or visit us at Podomatic, Spreaker, or YouTube.

Support us by becoming a DucksNPucks patron! Members can win game tickets, a $200 Cool Hockey gift card, and more!

DucksNPucks is part of The Puck Network, which covers the entire NHL. There are openings to cover your favorite team(s) and earn school credits! If you are interested, then apply by filling out the form here: Join Our Team. What are you waiting for? Start your sports media career TODAY!