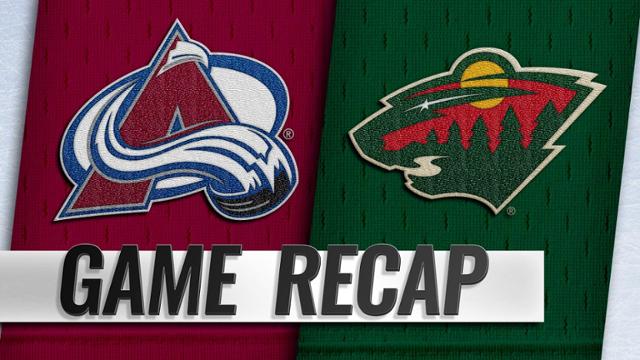 The day has finally come where fans get to watch their beloved Colorado Avalanche play again. Well, some were forced to listen to the game due to blackouts and cable disputes but that is a different story. The Avalanche have not played a competitive game against another team since March 9, 2020, in a 3-1 loss to the Los Angeles Kings. The Avalanche got scheduled to play the Minnesota Wild in a series of exhibition games the NHL set up for teams prior to the official “return to play” starts. The Wild are arguably the most hated rivals for fans in this time era. Nothing compared to the Detroit Red Wings but still a high amount of hatred between the two.

The Avalanche come into the game with everyone being healthy. Sam Girard did skate in the morning and sat out of the game for precautionary reasons, per Coach Bednar, via Mike Chambers. Joonas Donskoi got the Avalanche on the board first scoring a rebound goal (1:25). Nathan MacKinnon (4:47) would score again in the first and Landeskog (4:31) would score in the second, which would ultimately be the game-winner in the Avalanche’s 3-2 win.

Bednar elected to play both Philipp Grubauer and Pavel Francouz. Grubauer made 18 saves on 20 shots. The two goals scored by the Wild’s Matt Dumba and Eric Stall were not his fault. The one-timer from Dumba was nearly impossible to stop and a weird bounce off Staal’s stomach landed right behind Grubauer for an easy tap in. Francouz looked very calm in the net as he stopped all 14 shots he faced. He was patient and did not allow traffic to block his view. Stood tall to see the play before getting lower to make the save. Bednar plans to play both goalies for the round-robin rounds and will make a decision as to who will be the starter.

The Avalanche played very undisciplined against the Wild taking lazy slashing and high-sticking penalties. The got away with at least a couple of uncalled infractions too. They took a total of eight penalties against the Wild. The Wild took 5 penalties against the Avalanche. Each would only score once on their man advantage. The Avalanche had 26 blocks with Ryan Graves leading the way with four. The Avalanche’s penalty kill unit was really on their game but playing that undisciplined can how a detrimental effect in the playoffs and have costs team’s a chance at the Stanley Cup. Mikko Rantanen describes it as “rust” in a post-game interview on Altitude Sports.

The Avalanche lead in the hitting department, 19-14, and had a few scrums break out. Unfortunately, no one dropped the gloves. Nazem Kadri took some exception to the hit from Marcus Foligno and they both exchanged some light pushes, which resulted in matching roughing penalties in the second.

Some other notes: Erik Johnson (21:34) and Graves (20:09) lead in minutes played. MacKinnon had five shots on net followed by Johnson (4) and Kadri (4). Overall, this was not a bad start for the Avalanche. They got a good feel to play against another team and a hated rival. This is a good foundation to work on and get ready for the real games. Nikita Zadorov was strong on the puck and seemed more confidant when he had the puck. Vladislav Namestnikov, who had seven points (five goals and 2 assists) in his last ten games prior to the stop of the season, got on the board again with an assist. His line looks great and the chemistry was there. If that line can catch fire then the Avalanche can become that much more dangerous.

First: Landeskog for the game-winning goal, assists, and coming to the aid of Rantanen.

Second: Graves for his minutes played and four blocked shots.

Third: MacKinnon for his goal, five shots, and speed that has not missed a step.

Sunday, Aug. 2, versus the St. Louis Blues. The Avalanche will be the home team; therefore, will most likely wear their home jerseys.

Denver Avs is part of The Puck Network, which covers the entire NHL. There are openings to cover your favorite team(s) and earn school credits! If you are interested, then apply by filling out the form here: Join Our Team. What are you waiting for? Start your sports media career TODAY!